I remember flicking through the cult website, looking at their videos, getting stoked on all the content and genuinely getting excited to buy their gear. I would then look at their wheels and get smacked in the face by how expensive some of them would be.

To me, it didn’t make sense to pay such a price for a set of wheels that I had never ridden before, even if other pro riders said they were worth it.

Well that said and done, a generous fan of Downhill254 donated his set of Cult Emperors to me and I’ve been riding them for the last few weeks. Honestly, they’ve changed how I feel about freeriding and have helped me enjoy skating at slow speeds again.

They don’t roll as fast as you’d expect

First thing I noticed, was that these wheels were kinda sluggish and slow rolling. I thought this was weird because when you see a big core, you expect a wheel to be fast rolling and kinda dense. Not the case with these.
The core does work well, but I think the urethane is so soft and squishy at 78a, that even with a big core the wheel stills rolls slowly. This isn’t that bad when it’s at 71mm, but I can imagine it’s a nightmare when you get a lot closer to the core.

It’s also kind of interesting to think how squishy the wheel will be if it had a small core … But yeah, the urethane is soft, which also adds to how controllable it is in the slide.

If you want to learn more about urethane and how a wheel works, check out my guide to longboard wheels for beginners.

The urethane is buttery and hard to ice out on

The wheel slides pretty goddamn well and doesn’t really slow you down much. You could be cruising or going really slow and still slide a little bit of a distance. This is nice if you want to do big slides at moderate speeds (15mph-30ish mph) or if you want to slide a lot but not slow down too much. Wheels like this are perfect for most of my spots. If I do one big slide, I usually tend to slow down too much on my other freeride wheels, killing the fun prematurely.

It takes a lot to ice out on these wheels and here is why I think it is. The urethane is soft but slidey. This means when you slide, there will be a bit of grip that holds you, but won’t suddenly grip up (or bite) and buck you off.

Same goes when you’re about to ice out. Yes, you will feel it ice out, but getting to that point is slightly harder than it is on other wheels. And when you do ice out, it is a bit more controllable and you can pull it in. This is really nice when you’re going really fast and trying to slide.

The urethane has an in the pavement slide that feels like it is on top of the pavement. Allowing you to control the slide, but letting you go pretty gaddamn far. 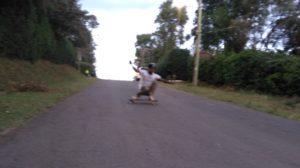 The hookup and release is so gaddamn controllable

I found myself skating faster and faster with these wheels and trying out slides at speeds I used to be scared of. I attribute most of this confidence to how controllable the hookup and release was.
If I kicked out badly, the wheel was forgivable enough that it wouldn’t suddenly throw me off my board.

The same went if I kicked out too much, the wheel wouldn’t ice out and leave me on my ass.
The above said I would rarely kick out badly. The wheel felt so consistent going slow(ish) and going fast that kicking out and holding the slide didn’t feel sketchy. All this gave me the confidence to go faster and hold out my slides longer.

I think the big core would keep the lips stiff and make it really easy to transition from gripping to sliding. Don’t know if this is true, but it’s how it felt to me. Also, I can imagine that the big core would encourage the wheel to wear more evenly and feel consistent as you wear it down but we shall see.

As y’all know, I love big cores on my wheels. Especially on my DH wheels, like those on the Seismic Alphas and Cult Raptures. They allow you to make the most out of the urethane and to have a wheel that rolls as fast as possible.

They don’t feel the best for hands down stuff

These wheels work great for stand up slides and stuff, but when it comes to hands down stuff they feel to slidey for me. The wheels don’t have enough slowing down power unless you REALLY push your weight into them, but even then they don’t slow you down enough.

Their forgivable hookup and release isn’t so useful here, because I really like wheels that hookup strongly and need you to push them out to slide.
So people might like how easily the breakout though. Might be a personal thing idk ..

Who would I recommend them for?

First things first. I wouldn’t recommend these to beginners. Whilst they are very controllable, I believe they are easy to flat spot. Beginners need durable wheels that don’t flat spot easily, they need wheels that can take a beating and still work for a long time.

I would recommend these to advanced riders who’ve got their stand-ups down and are looking to push their limits. These wheels are great for fast freeriding.

Where to buy them and are they worth the price?

Most European skate shops should have these in stock. They will be a bit harder to get in the US and Australia (I’m not 100% sure about Aussi) but there are a variety of other freeride wheels you can enjoy, so don’t worry about it.

I would say they are worth the price, especially if you are an advanced rider and want a freeride wheel to skate and enjoy once in a while. If you freeride most of the time, try to get the wheels when they are on sale because it will be a hit on your wallet. I don’t think they are super durable and worth it if you freeride all the time.

I don’t like freeriding because most of my spots are slow and need you to tuck all the way to squeeze as much speed as you can from them. A wheel that lets me bust loads of slides without slowing me down too much but not feeling icey, is special and worth it to me.
I think Cult hit the jackpot with this one.