Choo choo, ALL ABOARD THE HYPE TRAIN.

One thing that annoys me about wheels or longboard gear that is really popular is the lack of comprehensive reviews that follow up. You always have a youtube video here and there, but no one ever sits and talks about the little details. For me, it’s the little things that make something high-quality worth it.

So today, I’ll be reviewing the Seismic Alphas. I recently picked up a set of Mango scrubbies (Defcon urethane) and have been playing around with them for a while. I’m excited to talk about how these wheels perform and if they live up to the hype. 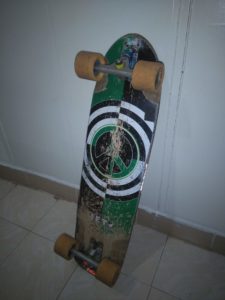 They are easily the fastest wheels I’ve tried.

I hit new top speeds on my local with these wheels. My previous was 42 and the new one was 45-47mph.

They were also really easy to push and get rolling, they weren’t heavy at all which was surprising. Comparatively, my Cult raptures were really heavy and hard to push when they were new and the same went for my Bigzigs.

It rails and has a lot of edge control. This means, it resists sliding and doesn’t want to slide easily. However, when it comes to sliding, it slides really easily and smoothly and it doesn’t slow you down as much.
My HD Bigzigs in 77a had more slowing down power than the Defcon thane and they were narrower.
That being said, Defcon is designed for longevity and it will outlast my Bigzigs by a long time I believe.

I want to stress that they don’t want to slide. and then they slide easy. This can be really confusing for some people and make the wheel difficult to control.

You can also get the Blackops thane, which has more slowing down power, but I haven’t skated them so can’t tell you much.

They slide differently depending on the pavement

But on some types of pavement, the grip is crazy and vice-like. This isn’t idea if you are on a skate trip sampling different types of roads and pavements. It is alright if you skate a handful of spots consistently though.

Who do I recommend them for?

Advanced riders or beginner riders looking for a challenge. This is because I’ve noticed that whilst the Defcon slides easy, it is hard to control. It’s so easy to ice out if you aren’t sliding perfectly (icing out is when the wheel slides further because you are sliding at 90 and it doesn’t slow you down as much, it can lead to some dangerous situations).

A beginner constantly sliding at 90 won’t experience how the Defcon slides and sooner or later they will flat spot the wheel. An advanced rider will be able to keep the wheel at less than 90 always get slowed down and keep the wheel wearing circularly.

I would recommend it because it’s an alternative to the grippy race wheels like Abec Centrax or BigZigs, but they still allow you to take lines, slow down and really perfect your riding. Letting your skills shine.
If you’re interested in them, check them out on Amazon.com.

What should you watch out for with this wheel?

They are quite wide so they might not fit under your board because of how much track width they add. If you’re trucks line up with the board, the wheels will definitely stick out quite a bit.

They are quite tall, so you might get wheelbite, but that might only be an issue at slow speeds. It’s hard to get bite at higher speeds because you rarely lean the amount necessary to get it.

Don’t use them for rain skating. I repeat, these are not a good wheel if you want to use them for rain skating. They have a wide contact patch so you can’t distribute your weight effectively over the wheel, so they don’t slow you down. You can’t flex the lips, so it’s hard to get traction.
Also, because the urethane is icy, they don’t grip the pavement well in the wet. I would suggest the blackops versions maybe.

If they simply aren’t your cup of tea, check out the Orangatang Kegels for a wheel that is slightly easier to slide and manage.

Closing thoughts, are the Seismic Alphas worth it?

I feel as a package, they really allow your skills to shine as a rider as opposed to you overcompensating with huge wheels like the magnums for proper grip. Chase Hiller set the record on Arirang hill on these wheels and was consistently placing on podiums with them.

That said, I don’t race or use wheels with skin a lot, so I might be chatting shit. I think in a race environment, they may really show their worth.
When it comes to day to day riding without the skin, I think they may be worth it because of how long they’d last and if you are looking to dial in your skill