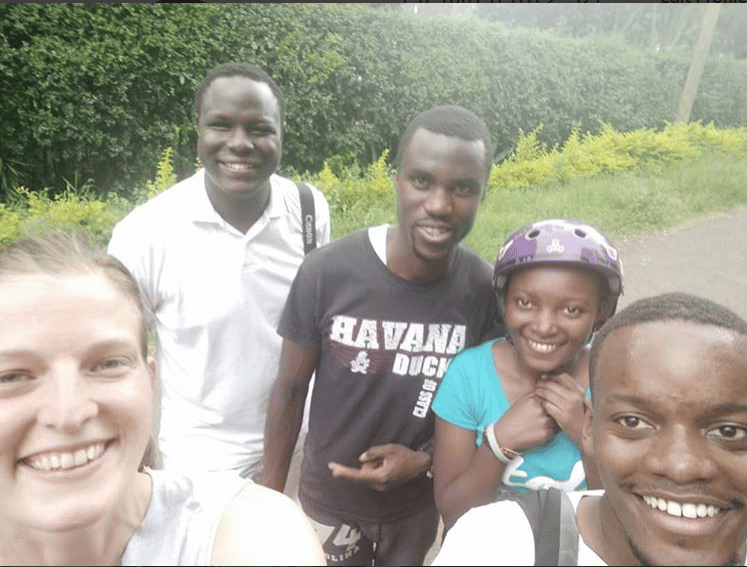 Unofficially, on the 2nd of June 2018, we had the first group longboard session in Kenya … it was pretty rad. I was stoked to host a group of Kenyan longboarders. We skated, had fun, laughed, fell, it was a good time. Hopefully the beginner of longboarding in Kenya

Personally, I have an (honestly limiting) belief that if I plan and look forward to things they don’t work or simply don’t happen. It is pretty damn irrational tbh. However, cause of this, I didn’t want to plan, advertise or put any expectations on this session, and it honestly blew away any expectations I had.

Contents hide
1 A disappointing start to the day …
2 How do I know everybody?
2.1 A video Eric took of me skating this hill. It was really scary the first few times and I couldn’t skate over a rough bit in the middle of the hill and would always break tuck … I also later dislocated my shoulder on this road from skating an inappropriate setup longboard lol.
3 How did the Kenyan longboard session get down?
4 What do ya’ll think?

A disappointing start to the day …

Firstly, I started out the day trying to shoot a follow run on a bike with my friend Eric (who also skates). He was a bit late (thanks to African timing) and we only got to do one follow before we had to go and meet up with the other guys for the skate session.
Our follow gear was my phone duct taped to Erics bicycle ….
The first (and only) run was disappointing as I didn’t set up the camera up correctly.
I hadn’t warmed up adequately either so my slides were funky and awkward.
… All in all it was pretty shitty and I didn’t get what I wanted in terms of footage.
I’m gonna ask (bully) Eric into filming again because I think we can get some really sick stuff and we’ve never done a proper raw run with me going full throttle on that road. Check it some of the better bits from it below:

Being already late, I cut our filming session short and rushed over to the meeting point we had agreed on with everyone.
I was expecting to meet up with Sonja and Christa.

How do I know everybody?

I had been teaching Christa how to slide over the last few weeks and she was making great progress, the next big Kenyan longboarder. She got over her fear of falling and has really been going at it recently. All she now needs is to start going faster so those wheels can break free and she can finally slide. Hopefully, we’ll soon be discussing about getting her,  her first longboard deck.
Sonja is an Austrian working in Nairobi. A mutual longboarder friend of ours linked us up and we’ve been planning to meet for a long time now. We’ve each always had stuff going on so it’s been a challenge to do so, but it finally happened.
I realise I didn’t really introduce Eric, but let me do so now. The way I met Eric was pretty funny. I was bombing a straight hill, tryna catch some speed. Eric rolled up with his skateboard and saw me do one run. I saw him and stoked on seeing another skateboarder, greeted him and then went to do one more …
Eric saw me skating down and realised he could probably do the same (you can probably guess where this is going).
Now that hill isn’t a joke, full tuck you can get upto 40mph (66km/h ish) and standing up 30mph is possible. It’s rough, bumpy and uneven. On a longboard it’s a challenge but on a skateboard, let’s just say Eric was very brave. Worse, he didn’t realise the difference between our gear and how inappropriate his setup was.

A video Eric took of me skating this hill. It was really scary the first few times and I couldn’t skate over a rough bit in the middle of the hill and would always break tuck … I also later dislocated my shoulder on this road from skating an inappropriate setup longboard lol.

Eric bombed the hill from the top. As I saw him come down I held my breath, all I wanted was for him to reach the mellow bit without falling.
Unfortunately, about halfway down he got wobbles and spectacularly fell off his board.
He rolled over a few times and got a few cuts and bruises, even broke the screen of his phone and watch. Otherwise, he was ok. Just a painful lesson learned.
But he seemed fine otherwise, he even took more videos as I kept on skating and hang on for a bit before going home.
Since then we’ve skated a lot and he has taken a large number of my videos. I really need to pressure (bully) him into buying his own longboard so he too can be a Kenyan longboard-er.

How did the Kenyan longboard session get down?

It was pretty great, we sessioned one of the corners and skated up and down one of the hills. Unfortunately, not much to say. Skating is such an in the moment experience. It’s you there with your board and with your friends, it’s kind of hard to put the feelings into words …

Having Sonja there was great as she gave a fresh perspective and I think that was valuable for Christa and Eric as they go on learning – I don’t think I am a very good teacher if I’m honest, it’s good to have another experienced longboarder there who can describe the techniques from another angle.
Christa is doing well as a beginner longboarder and is on the verge of getting her first slide down. Be on the look out for it.

Here is a short edit I quickly put together from that day, you can check it out below. Everybody had a lot of fun and we’re gonna do this again soon, if you wanna join don’t be shy. Nairobi longboarding is slowly building up steam. Is this the beginning? Maybe …

If you’re not from Nairobi but still interested in learning to skate/longboard, check out my article on how beginners can start downhill skating.

Here are some more pictures from our Kenya longboard session.

Credits for the pic go to Maleek Salvines, from Elite Media.

We also did another follow run with Eric, he’s gonna send me the clips so be on the look out for that. We still need to work on the follow cam skills and sort one or two things out. I reckon if we had a full day dedicated to it we’d be gucci and produce something sick.
It was good to see a bunch of people longboarding in Kenya.

What do ya’ll think?

It was a pretty fun day and I’m planning to host it every Saturday. If you are interested and want to hang out, message the page on facebook. We’d be glad to accomodate you.
If you wanna support me, give the page a like and follow the social media pages you like.

Check out our social media

hello……I would like to enquire where I would get a longboard in Kenya?

You can buy one at decathalon or Saga Yard (only contactable through their Instagram). Otherwise importing is your best option. Freight forwarders like Kentex Cargo make importing very easy

Downhill254 is a participant in the Landyachtz Affiliate Program. Downhill254 earns advertising fees by linking to Landyachtz,